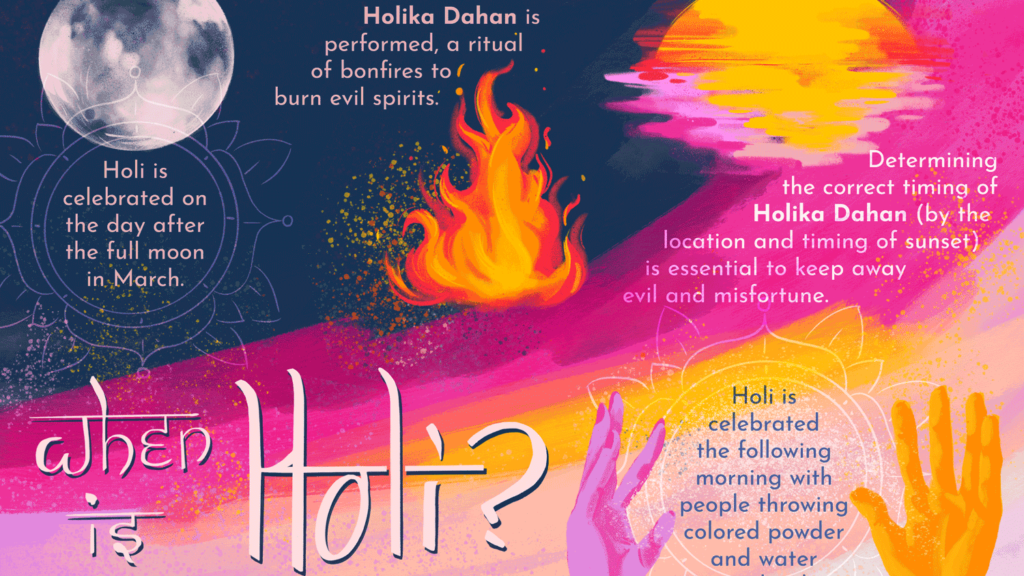 One of the major festivals of India, Holi is celebrated with enthusiasm and gaiety on the full moon day in the month of Phalgun which is the month of March as per the Gregorian calendar.

Holi festival may be celebrated with various names and people of different states might be following different traditions. But, what makes Holi so unique and special is the spirit of it which remains the same throughout the country and even across the globe, wherever it is celebrated.

Entire country wears a festive look when it is time for Holi celebration. Market places get abuzz with activity as frenzied shoppers start making preparations for the festival. Heaps of various hues of gulal and abeer can be seen on the roadside days before the festival. Pichkaris in innovative and modern design too come up every year to lure the children who wish to collect them as Holi memorabilia and of course, to drench everybody in the town.

Womenfolk too start making early preparations for the holi festival as they cook loads of gujiya, mathri and papri for the family and also for the relatives. At some places specially in the north women also make papads and potato chips at this time.

Everybody gets delighted at the arrival of Holi as the season itself is so gay. Holi is also called the Spring Festival – as it marks the arrival of spring the season of hope and joy. The gloom of the winter goes as Holi promises of bright summer days. Nature too, it seems rejoices at the arrival of Holi and wears its best clothes. Fields get filled with crops promising a good harvest to the farmers and flowers bloom colouring the surroundings and filling fragrance in the air.

A Hindu festival, Holi has various legends associated with it. The foremost is the legend of demon King Hiranyakashyap who demanded everybody in his kingdom to worship him but his pious son, Prahlad became a devotee of Lord Vishnu. Hiranyakashyap wanted his son to be killed. He asked his sister Holika to enter a blazing fire with Prahlad in her lap as Holika had a boon which made he immune to fire. Story goes that Prahlad was saved by lord himself for his extreme devotion and evil minded Holika was burnt to ashes, for her boon worked only when she entered the fire alone.

Since that time, people light a bonfire, called Holika on the eve of Holi festival and celebrate the victory of good over evil and also the triumph of devotion to god. Children take special delight in the tradition and this has another legend attached to it. It says that there was once an ogress Dhundhi who used to trouble children in the kingdom of Prithu. She was chased away by children on the day of Holi. Therefore, children are allowed to play pranks at the time of ‘Holika Dahan’.

Some also celebrate the death of evil minded Pootana. The ogress tried to Lord Krishna as an infant by feeding it poisonous milk while executing the plan of Kansa, Krishna’s devil uncle. However, Krishna sucked her blood and brought her end. Some who view the origin of festivals from seasonal cycles believe that Pootana represents winter and her death the cessation and end of winter.

In South India, people worship Kaamadeva- the god of love and passion for his extreme sacrifice. According to a legend, Kaamadeva shot his powerful love arrow on Lord Shiva to revoke his interest in the worldly affairs in the interest of the earth. However, Lord Shiva was enraged as he was in deep mediation and opened his third eye which reduced Kaamadeva to ashes. Though, later on the request of Rati, Kaamadeva’s wife, Shiva was pleased to restore him back.

On the eve of Holi, called Chhoti or Small Holi people gather at important crossroads and light huge bonfires, the ceremony is called Holika Dahan. This tradition is also followed in Gujarat and Orissa. To render greatfulness to Agni, god of Fire, gram and stalks from the harvest are also offered to Agni with all humility. Ash left from this bonfire is also considered sacred and people apply it on their foreheads. People believe that the ash protects them from evil forces.

Great excitement can be seen in people on the next day when it is actually the time for the play of colours. Shops and offices remain closed for the day and people get all the time to get crazy and whacky. Bright colours of gulal and abeer fill the air and people take turns in pouring colour water over each other. Children take special delight in spraying colours on one another with their pichkaris and throwing water balloons and passers by. Women and senior citizen form groups called tolis and move in colonies – applying colours and exchanging greetings. Songs, dance on the rhythm of dholak and mouthwatering Holi delicacies are the other highlights of the day.

Lovers too long to apply colours on their beloved. This has a popular legend behind it. It is said that the naughty and mischievous Lord Krishna started the trend of playing colours. He applied colour on her beloved Radha to make her one like him. The trend soon gained popularity amongst the masses. No wonder, there is no match to the Holi of Mathura, Vrindavan and Barsana – the places associated with the birth and childhood of Radha and Krishna.

There is also a tradition of consuming the very intoxicating bhang on this day to further enhance the spirit of Holi. It is so much fun to watch the otherwise sober people making a clown of themselves in full public display. Some, however, take bhang in excess and spoil the spirit. Caution should therefore be taken while consuming bhang delicacies.

After a funfilled and exciting day, the evenings the spent in sobriety when people meet friends and relatives and exchange sweets and festive greetings.

It is said the spirit of Holi encourages the feeling of brotherhood in society and even the enemies turn friend on this day. People of all communities and even religions participate in this joyous and colouful festival and strenthen the secular fabric of the nation.